For all the fuss over this case, not one in a hundred of the people who argue that Citizens United should be overturned know what it was about.

Here it is: Hilary The Movie

The court case was to prevent the movie from being shown in theaters before Hilary could win the nomination. The delay tactic worked, but she lost the nomination to Barack Obama, and the Supreme Court ruled against her as well.

But the outrage was just getting started. A non stop barrage of repeating statements like, “Corporations are not people,” from the mainstream media completed vanished what the case was actually about from public consciousness.

The court ruling in the case made NO CHANGES whatsoever to the amount of campaign contributions, by PACs, by corporations, by billionaires, or by anyone.

Overturning Citizens United would effectively make politicians above criticism, which suits most politicians just fine, whether Republican or Democrat. It’s no wonder so many of them are out there beating up support to overturn the ruling.

We hold that the court made the correct decision, and that your right to say Hilary is a hag, George Bush is a dick, Bernie is a moron, Donald Trump is a blowhard, and whatever you like about anyone else who comes along.

This right to free speech that you enjoy, also applies if you were to get together with a group of friends who think likewise, whether that group is a team, a union, a corporation, a PAC, or a church picnic.

What are these groups made up of? Chickens? Monkeys? Stalks of celery? No. They are groups of people. 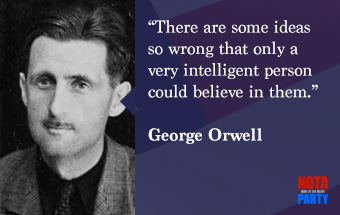 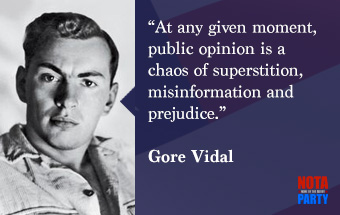 Oh, by the way, if you wanted to make a big juicy contribution to the NOTA Party here‘s where to do it! Oh heck, even a teensie weensie donation would be fine. 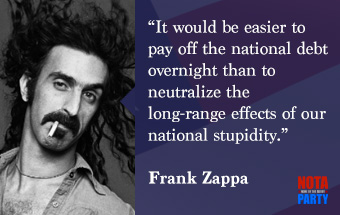